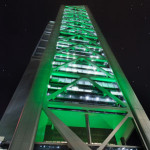 Awarded a 6 star Green Star –Office interiors v1.1 certified rating, the 46 level Brookfield Place office tower has become iconic on the Perth skyline. Being the tallest “side core” commercial building in the southern hemisphere, the 75,000sqm premium grade office tower centers the restored heritage complex of buildings that were redeveloped as part of […] 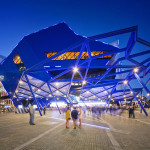 The long awaited 15,500 seat multi-function Perth Arena project was completed in 2013 to National and State Architecture awards. Designed jointly by ARM and Cameron Chisholm Nicol Architects, the Arena facility has been widely acclaimed for its modern rethinking of an eternity puzzle, yet impressive and extremely well featured technical capabilities. Over the extended period […] 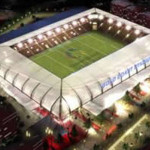 The new $160 million, 25,000-seat stadium on Australia’s Gold Coast has been designed with energy efficiency and sustainability as two key factors. World leaders in sports architecture, HOK Sport considered a number of environmental aspects in the development of Skilled Park, including utilisation of natural ventilation and lighting to reduce energy costs and using recycled […] 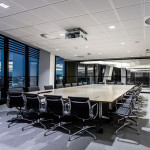 Norton Rose Group became the first tenant to lease a tenancy in the 6 Green Star premium office building located at One One One Eagle Street. The Norton Rose tenancy will cover four levels, 21 to 24 with level 21 being a purpose built client level. With the base build being primarily DALI and having […] 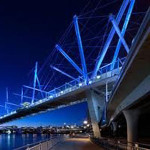 The Kurilpa Bridge (originally known as the Tank Street Bridge) is a $63 million pedestrian and bicycle bridge over the Brisbane River in Brisbane, Queensland, Australia. The bridge connects Kurilpa Point in South Brisbane to Tank Street in the Brisbane central business district. In 2011, the bridge was judged World Transport Building of the Year […]

Figtree Lighting – One One One Eagle Street 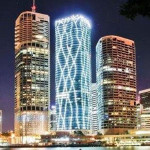 One One One Eagle Street Brisbane, Australia is the largest dedicated office tower for the Brisbane CBD. It has been designed to achieve a Green Star office design rating of 6. The tower stands tall at 195m, and has been constructed on a unique site right alongside the Brisbane River. The building design was quite […] 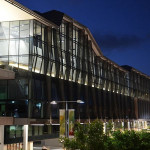 Brisbane Convention & Exhibition Centre is located in the cities unique precinct at South Bank, home to Brisbane’s thriving arts and cultural community. The centre is built upon the site of World Expo Park, the roller coaster theme park built for the successful hosting of Brisbane’s World Expo 88. The original building was opened in […] 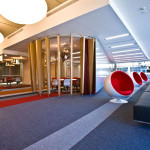 Virgin Australia national head office was built in 2008 in Bowen Hills, Brisbane. Costing some $61 million dollars the “Virgin Village Workplace” concept covers three buildings, creating a campus like culture across the site of about 13,000 square metres. This precinct will be home to about 1,000 staff and will be a reflection of the […] 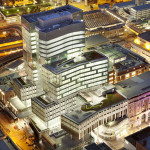 The One40 William Street Office project in Perth Western Australia incorporated a significant heritage component with the restoration and integration of 3 iconic Perth buildings and a fragile heritage façade. The 19 levels of A Grade commercial office space were awarded a 5 Star Green star Design and As Build rating. Lighting control was designed […] 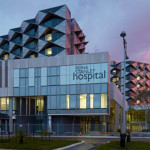 Equivalent to four city blocks, the Fiona Stanley Hospital in Perth Western Australia is one of the latest “state of the art” Hospital complexes to be built in Australia.  Constructed over 18 building, a Campus wide Lighting control system was implemented and integrated site wide to 9 buildings by Balanced Technology’s Western Australian Distributor Light […] 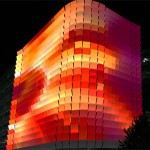 The Rundle Lantern concept proposed by Fusion’s principal, Damien Mair, involved wrapping a low resolution video screen around a rather unattractive eight-storey council car park on the corner opposite the Rundle Mall. The intention was emphatically not to display anything as mundane as football, motor racing, advertising, news or music videos. According to Mair: “The […] 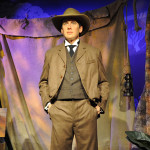 Madame Tussauds Sydney opened in April 2012. Balanced Technology’s Victorian distributor Lightmoves, lights up the wonderful world of wax models with over 70 celebrities including world’s best known personalities, our very own Aussie stars and a range of fun interactive experiences. Working under the direction of Madame Tussaud’s international design team who are responsible for […] 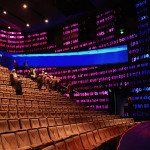 If there was ever any doubt that Melbourne was Australia’s Arts capital, it was erased totally when the Yarra Arts Precinct opened in early 2009. The Precinct, which contains two attached yet separate venues, set a new benchmark for arts facilities in this country. Melbourne Theatre Company’s (MTC) new theatre space and the Melbourne Recital […] 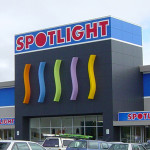 Spotlight is the largest chain of haberdashery, fabric and craft stores in Australia. Over their 32 year history, Spotlight has opened 100 new stores throughout Australia, New Zealand and Singapore. In early October 2004, Spotlight decided to upgrade their Bayswater store located in Melbourne‘s eastern suburbs. Recognising an excellent opportunity, Spotlight snapped up a former […] 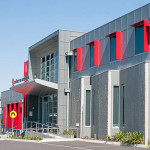 Not all the projects that Balanced Technology’s Victorian distributor Lightmoves supply control equipment for are large or are entertainment projects or have large budgets. The vast majority of projects are small systems where clients want the convenience of distributed control, provide a safe work environment for their employees, comply with current statutory regulations, provide significant […] 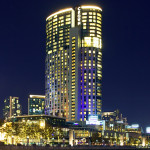 The Crown Casino complex includes a five star hotel, restaurants, cinemas, prestige retail and three 10m x 10m signs in addition to the main gaming areas. In the retail areas, the lighting control system functions as a programmable distribution board so that total flexibility is available for tenancy changes. Twenty-four hour operation and maintaining security […] 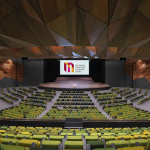 2009 saw the opening of the southern hemisphere’s largest – and the worlds first 6 star energy rated – convention centre. The Melbourne Convention and Exhibition Centre, located in the new south wharf precinct, is one of the largest and more impressive projects seen in this state for many years. From the 5000+ seat Plenary […]